Magical Membranes: Born in the Caul

A lass if born in June with a caul
Will wed, hev bairns & rear ’em all.
But a lass if born with a caul in July,
Will loose her caul & young will die.
Every month beside luck comes with a caul
If safe put by,
If lost she may cry:
For ill luck on her will fall.
For man it’s luck – be born when he may –
It is safe be kept ye mind,
But if lost it be he’ll find
Ill-deed his lot for many a day.

In the course of my work on preserved tattoos and human skin artefacts over the past 8 years, I have seen many strange objects, been to some remarkable places, and met some very colourful people: From a collection contemporary artworks made of tanned fragments of human skin, stitched together to make eerie and beautiful sculptural works; to the home of a private collector whose miscellany of weird and wonderful possessions includes the complete flayed skin of a nineteenth-century man, stuffed in relief and pinned to a door; to Geoff Ostling, a living, breathing tattoo collection, and the first man to bequeath his tattooed body suit to a national art gallery post-mortem. My research has taken me to pathology museums and rare manuscripts archives, to medical curiosity shops and flea markets. But perhaps the most surprising skin object I have come across so far turned up much closer to home – in the bottom of my grandmother’s handbag!

The subject of my unusual family heirloom first came up in a conversation with my mum during a visit home just before Christmas a few years ago. We’d driven out to a quiet country pub for lunch, and got to talking about my research over a beer. At the time, I was in the middle of writing up my thesis, and I’d become a master at finding all kinds of little distractions, including writing fictional stories based on interesting fragments of historical archive material I’d found that had no place in my PhD. One of my fields of interest was folklore and ritual, especially beliefs and practices surrounding birth and death. I had been enthusiastically recounting the gruesome tale of “Le fils de la terre” (post on that one forthcoming), that I’d recently come across in an old book of medical anomalies, when my mum made the observation that the circumstances of ones birth has often been thought to foreshadow their fate in life.

“Like me” she told me, “I’m supposed to be immune from drowning.” Surprised, and never having heard this superstition before, I asked her why she thought so. “Because of my caul.”

“My caul. It’s like an extra film of skin that sometimes covers a baby’s face when they’re born. It’s supposed to make the child special, and protect them from drowning – your Nan kept mine. A sailor offered your granddad money for it when he worked on the docks in Liverpool, but she wouldn’t sell it. I still have it, if you want it – she kept it in her handbag for nearly fifty years.” 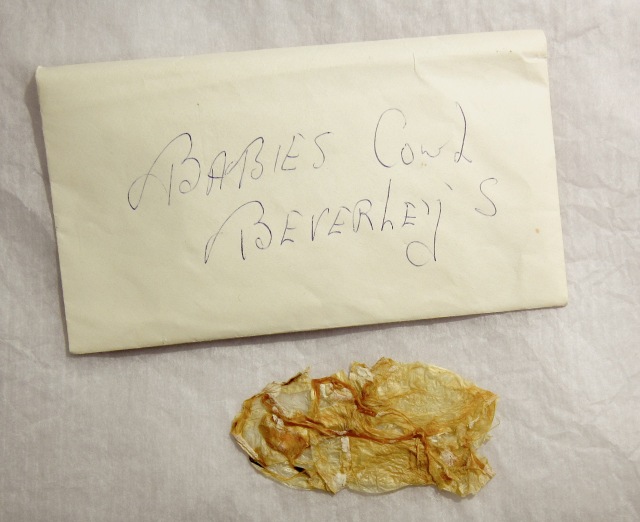 My mother’s caul, also sometimes called a “cowl”. The delicate membrane was carefully removed and folded after birth, then left to dry out. It was kept in an envelope inside my grandmother’s handbag for 50 years.
Photograph © Gemma Angel.

Of course I was very excited to see this family skin relic, previously unknown to me  – and more than a little concerned to hear how it had been stored for the past five decades. I had, after all, been studying the dry preservation of human remains for four years by this point – and an envelope in a handbag certainly did not constitute archival treatment! I first established that the caul was in a stable physical condition, and having upgraded its storage conditions to something approaching archive quality, I began to do my own research into this fascinating and rare natal phenomena.

The caul (also sometimes called a ‘cowl’ as in my grandmother’s handwritten description on the envelope above, or a ‘kell’ in Scotland) is a skin-like membrane that covers the face and head of a newborn, which is immediately removed after birth. The most straightforward medical explanation for this phenomenon is that a piece of the inner lining of the amnion breaks away and adheres to the baby’s head during birthing. However, some believe that there is another, much rarer type of caul, which is not maternal tissue at all, but rather is part of the infant. This second variety consists of a membranous ‘veil’ that covers the face and head like a mask, and is attached firmly behind the ears by cord-like ‘loops’ (you can see an image of a caul with these ‘loops’ here). According to these accounts, the presence of ear loops makes the removal process more complex, since it must be carefully cut away.

Unfortunately, my grandmother passed away before I was able to ask her how exactly my mum’s caul was removed, and I have been unable to find any explicit description of this second type of caul in the medical literature. However, it seems that the caul of European folkloric tradition has simultaneously been considered to be part of the child while effectively extending the protective qualities of the maternal membrane beyond the womb. This accounts for some of the apparently contradictory beliefs surrounding its powers, which on the one hand follow the logic of sympathetic magic, whereby the caul retains an essential relation to the individual born with it; and on the other, locates the supernatural powers within the object itself, allowing magical benefits to be transferred through changes in ownership. For example, in 1922, one commentator observed that:

There is or was until recently a prevalent belief that there is a sympathetic relation between the original caul-bearer and the membrane, when they are separated ... By some it is believed that if the caul becomes moist its absent owner is in trouble; by others, on the contrary if it shrivels up its owner is wasting away. [2]

Thus connection and separation are the two opposing yet intrinsically linked principles of the caul’s symbolic power, reflecting the connection/separation of the child from the mother at birth. Bodily materials shed or removed during social rituals such as placenta, baby teeth, first haircut, and circumcision are considered to possess strong symbolic or magical value in many cultures around the world. This is especially so when these relics are related to birth. Body parts shed at birth are “regularly associated with the person’s spirit, with their life and death, their health, their future character, their successes and setbacks.”[3]

According to folk beliefs from England, Germany, France, Holland, Iceland, Albania and Romania amongst others, children ‘born in the caul’ are considered to be special, often possessing powers of second sight or clairvoyance. The most commonly cited supernatural powers attributed to the caul are the gifts of healing, seeing and eloquence, the qualities of dexterity and cunning, and especially the immunity it gives from death by drowning, by fire, or from a wound.[4] The caul is said to be a particularly powerful talisman against drowning; for this reason, the caul was especially prized as an amulet on board ships, since everyone on board was believed to benefit from its protection.[5]

Dr. Thomas Forbes notes that historically, several terms that originally referred to the entire amnion, later came to specifically signify the caul, such as the Latin amiculum, French coiffe, and German Kinderbälglein.[6] The majority of European terms have meanings related to garments, such as caps, helmets, coats or shirts, but some, such as the Latin pellis secundina refer explicitly to a second skin. In Slavic tradition, for instance, the caul signaled the child’s dual nature, conferring the gift of metamorphosis in the form of a ‘second skin’ that allowed them to take the form of other animals such as wolves. 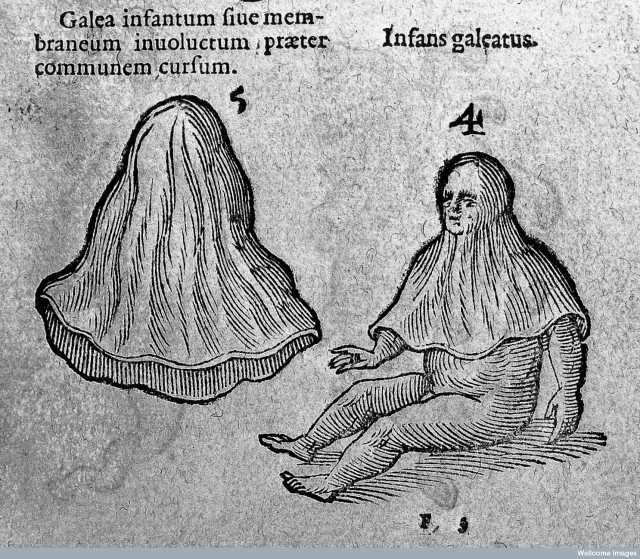 Like most early modern physicians, Gemma was dismissive of the superstitions ascribed to the caul, although there seems to be some confusion as to its composition in his text. He describes the caul as:

Nothing other than the remnant of another membrane, much softer than the amnion, but nevertheless more solid, bound with a purple border or fringe, and wrapped around the whole head down to the umbilicus, not without great danger to the baby unless the membrane was removed as quickly as possible; thus I myself have observed it in my first-born son who game helmeted (galeatus) into the world.

Historically, the caul was carefully preserved after birth and kept as a protective amulet, a tradition that my own grandmother continued. Anthropologist Albert Doja notes that the Southern Slavs sew the caul into a pouch to be worn around the neck as a good luck charm or kind of “companion spirit”, and in Dalmatia, the caul was placed under the owner’s head on their deathbed to ease their passing. Whether or not such superstitions are to be believed today, my mother’s caul is nevertheless a fascinating fragment of folk heritage that reveals some of the deeply embedded cultural anxieties surrounding birth. Birth is always a fraught process, and one that potentially brings both mother and child close to death.

In our conversation at the pub, my mum also shared another revelation with me: Like me, she too was born breech – feet first – a far more dangerous prospect when she was at delivered at home in 1956. Luckily for my mother, she was born with a caul during the month of June, and succeeded in raising all of her bairns, just as the rhyme at the beginning of this article predicted! Perhaps luckily for me, I have inherited this unexpected talisman – and apparently any magical properties it may possess. Magical or not, to me it is a precious heirloom and a lasting material connection between three generations of women in my family.

[5] See for example, Christina Hole, ‘Superstitions and Beliefs of the Sea‘, in Folklore, Vol. 78, No. 3 (Autumn 1967): 184-9. She describes the common English belief that it is the object itself, rather than the circumstance of an individual’s birth, that holds the power of protection:

If a child is born with his head covered by the thin membrane commonly called a caul, or a mask, he will never be drowned, provided that he keeps the caul. It is not enough to be so born; if the caul is lost or thrown away, the immunity vanishes with it, and if the caul is sold, its power passes to the buyer. For this reason, cauls are quite often bought by sailors, especially in times of war, for prices varying from £5 to £20. (p.186)

See also, Christina Hole, ‘Notes on Some Folklore Survivals in English Domestic Life‘, in Folklore, Vol. 68, No. 3 (Sept. 1957): 411-19, in which the author relates an account of a fatal loss of drowning immunity after the caul was discarded:

In Somerset, just before the 1939 war, I was told of a little boy who was born with a caul. This was carefully preserved at first, but when he was twelve months old, his mother was persuaded by some friends to throw it away. Very soon afterwards the child was drowned in a shallow pond. My informant, the boy’s sister, thought this was merely a coincidence, though a curious one; but she said that almost everyone else in the village was quite sure that the accident would not have happened if only the caul had been kept. (p.412)