Science Museum Object Number A544: Preserved human skin, tattooed with a series of patterned dots and crosses; initials and lettering in French; two hearts, including one pierced by arrows; and the head and torso of a man. 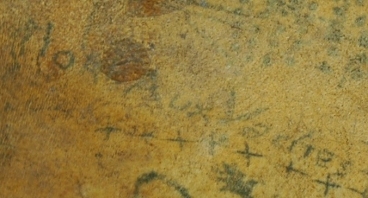 Back in June, I wrote a post about “the wounded tattoo“, one of the larger tattooed skin specimens in the Wellcome Collection. At the time, I was primarily interested in various qualities of the skin that tell a story about how it was preserved, and even which part of the body the skin had come from. However, I feel that some of the very numerous tattoos on this particular specimen also deserve mention. As well as the clues in the shape and texture of the skin, the orientation of the tattoos also suggest that this segment of skin belonged to a left forearm: Above a series of banded horizontal dots, a short ‘wristband’ tattoo is visible, consisting of a decorative pattern of diamonds with a central heart motif. The crude male figure on the back of the hand is also tattooed upright, so as to be presented the right-way-up to others. A number of words and phrases are tattooed vertically down the arm, orientated towards the body in such a way that they would have been legible to the bearer. The most interesting of these reads ‘Mort Aux Vaches’, which translates literally as ‘Death to Cows’.

Tattoos over the back of a left hand. (Science Museum object no. A544).
Photograph © Gemma Angel, courtesy of the Science Museum, London.

This particular phrase apparently originated during the Franco-Prussian War (1870-1871), when French soldiers used it as a term of abuse for the German ‘Wache’ (guard, or sentinels). The similarity of the word ‘waches’ to the French ‘vaches’ may explain the evolution of the expression ‘Mort Aux Vaches’, which was extended as an insult specifically to the police and gendarmes, and finally to anyone in uniform. The insult was considered so provocative in fact, that some offenders appeared in court charged with verbally abusing officers of the law. Writing in 1901, Anatole France gives some insight into the use and meaning of this expression in his satirical L’Affaire Crainquebille, (The Crainquebille Affair). The hapless Jerôme Crainquebille is accused of insulting a police officer. During his trial, his defence clarifies the terms of the insult for the court:

My client is accused of having said: “Death to cows!”. The meaning of this phrase is in no doubt. If you flip through the dictionary of slang, you will read: “Vachard, lazy, idle; stretching lazily like a cow, instead of working.” – Cow, who sells out to the police; snitch. “Death to cows!” is said in certain circles. [1]

In France, a shorthand version of this expression consists of three dots arranged in a triangle, tattooed between the forefinger and thumb. This particular tattoo is amongst the most common gang tattoos around the world, and is particularly popular within the Cuban and Russian underworld. The signification of the three dot tattoo varies greatly depending upon national and historical context, however; it has also been associated with sailors, who would traditionally receive three dots to mark their first voyage.