From the Storage Archives: A Dagger Through the Heart

Science Museum Object Number A670: Preserved human skin, showing the tattooed image of a dagger piercing the skin of the chest.

The image above shows an example of the iconic dagger-through-the-heart tattoo. Positioned over the left side of the chest above the heart for maximum symbolic effect, this design often features the effect seen above, in which the blade appears to pierce through the nipple. The design may or may not include a hand gripping the dagger, or the addition of falling drops of blood; but in all cases this tattoo is intended to symbolize betrayal in love, or a broken heart, and is still a popular motif today.

The tattoo pictured here was produced using a hand-poking technique, in which a bundle of hand-held needles dipped in ink are inserted into the skin, building up the design in a series of individual dots. The hand-poking technique is extremely difficult to master, but would have been the only method available to soldiers and sailors prior to the invention of the electric tattoo machine in 1890. Even after this time, it would have been common for men of the armed forces to tattoo one another in this manner in barracks or on board ship, using whatever materials were available to hand. The amateur skill of the tattooist is readily visible in the example above, indicated by the variation of ink-depth in the skin. Should the ink not penetrate deeply enough during tattooing, the healing process and gradual fading will lead to broken areas within the design. Conversely, if the ink is introduced too deeply, it will ‘bleed’ into the surrounding tissue, resulting in a characteristically fuzzy or ‘beaded’ look (also known as tattoo ‘blow-out’).

The skin itself is also interesting; amongst the thinnest in the collection, it is very brittle and non-pliable, with an undulating surface. The uppermost corner is curled back, which may indicate that it was not sufficiently dried before being unpinned from its support. Particularly unusual is the nipple, which is raised in a convex bubble, standing approximately 7mm above the surface. This could in fact have been deliberate – the nipple may have been ‘pushed out’ and stuffed during the drying process in order to maintain its shape. Dark red capillaries visibly streak the surface beneath the nipple. The skin is almost entirely translucent, with the exception of a conspicuous white patch at the lower right corner. This is the result of desquamation, or ‘skin-slip’, suggesting that decomposition was already underway by the time that this tattoo was collected.

The photograph below reveals both the protruding nipple and the fragile transparency of the skin. 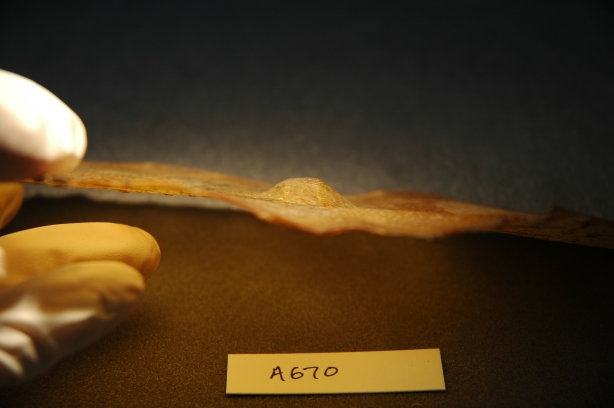 1 Response to From the Storage Archives: A Dagger Through the Heart